The Congelo absorber is a modular ammonia-water absorption refrigeration system. The systems are designed according to customer requirements with regard to temperature and performance.

The congelo absorption system works with gaseous ammonia as refrigerant. In the absorber unit of the plant, the refrigerant gas ammonia is dissolved (absorbed) in water. This releases some heat (exothermic process), which is cooled away with cooling water so that the absorber unit continues to work efficiently.

If the refrigerant gas is dissolved in the water, it is practically no longer compressible and can be pumped to the higher pressure level of the refrigeration system by a pump with low energy consumption. As soon as the water/ammonia mixture is at this pressure level, it is preheated by an internal heat recovery system in the solution heat exchanger and then supplied with the actual drive energy in the form of heating heat (waste heat from processes or block-type thermal power stations) in the extractor. The ammonia begins to dissolve from the water as it heats up. In the rectification column the mixture is distilled several times and in this way the ammonia is completely separated from the water. The pure ammonia vapour leaves the pressure port in the direction of the condenser.

From this point on, the system again corresponds to a conventional refrigeration system. The refrigerant ammonia is liquefied, subcooled and expanded to the evaporation pressure by an expansion element. In the evaporator, it absorbs the heat to be dissipated from the refrigerant and evaporates. Now the circuit closes and the ammonia flows back to the absorber, which practically “sucks in” the gas instead of a conventional mechanical compressor. The ammonia vapour is absorbed again by the water. 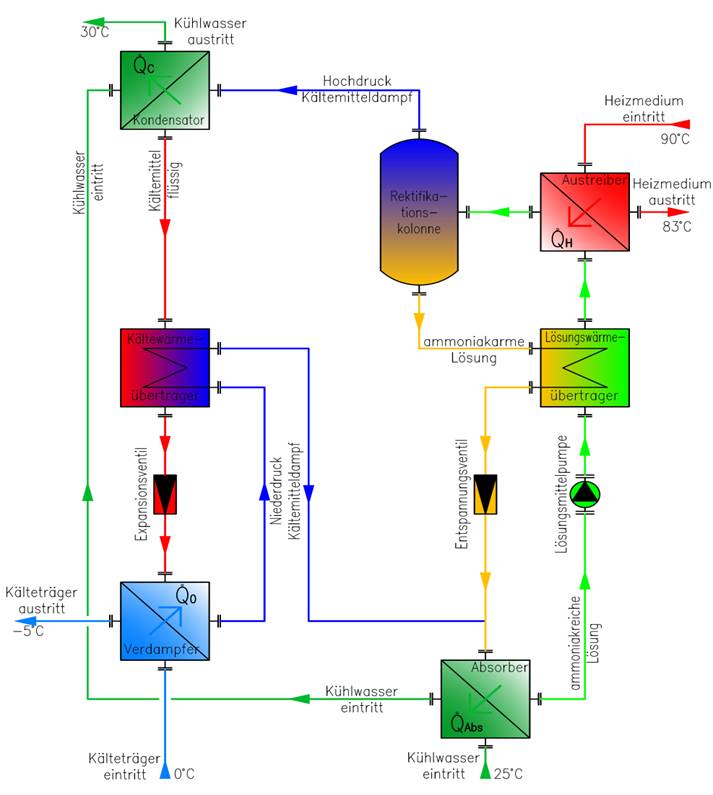 To the next product category

To the next product category

We supply our customers with cross-component system solutions in the field of refrigeration, air conditioning and cryogenics. Our approach is to achieve the most efficient results possible with individual system components when it comes to maintenance, costs and energy.